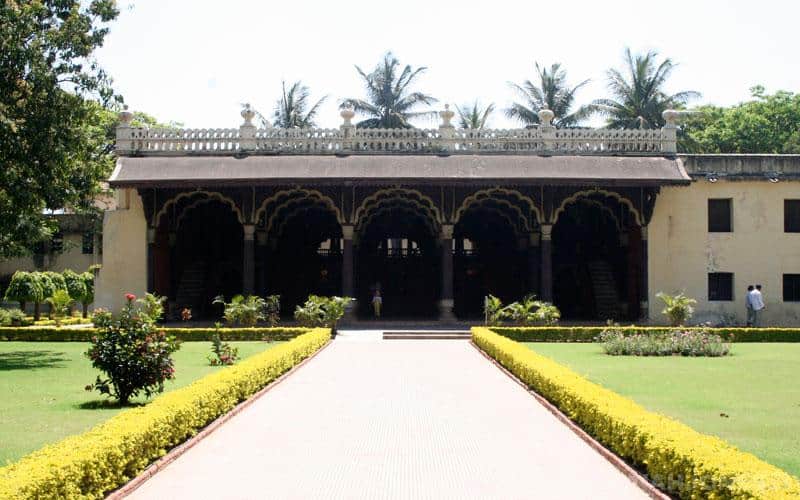 The Summer Palace of Tipu Sultan was constructed in 1784 within the premises of Bangalore Fort. Tipu Sultan used it as a summer residence. The palace is an incredible blend of Indo-Islamic architecture. Hyder Ali, Sultan of Mysore, had started the construction of this palace during his governance however it was completed by Tipu, Hyder’s son, in 1791. Post Tipu Sultan’s death in 1799, the British Administration used this palace as their Secretariat. Today, both the Bangalore Fort and Tipu Sultan’s summer palace have been separated by countless modern-day constructions filling up the spaces.

The structure of this palace is quite fascinating and unusually extraordinary.  The term palace, in general, connotes a structure fabricated with marble carvings or intimately and exhaustively designed motifs. However, such is not the case with this architectural spectacle. The palace has been built with Indo-Saracenic style teakwood and radiates a charm of its own. The turret is surrounded by impeccable gardens. There are grooves of big pillars and arches with elaborate detailing. The palace demonstrates the King’s mementos ranging from the frescos decked on the walls and the paintings throughout the palace.

The rooms on the ground floor have been converted into a museum where the various rare artifacts address and speak of the battles fought and won by Tipu. You will come across the attire adorned by the King in his ‘royal’ days reflecting his majestic lifestyle. You will even get to admire his other personal belongings such as his crown in silver and gold pedestals; the silver vessels, replica of Tipu’s tiger et al. The palace also includes the pleasingly designed ceilings and ingeniously built balconies. It was from the balcony on the first floor; Tipu Sultan would address his court.

“The summer palace was a favourite of Tipu’s. The palace and the fort was where he could repose, entertain his guests; he would hold many meetings and devise many a stratagem. Many months were spent here every year; the fort and the palace was where a “game of thrones” was literally devised by the brave and brilliant Tipu Sultan till he passed away in 1799.”– Harsha, July 14th, India.com

The Summer Palace is also known as ‘Daria Daulat Palace’ is considered to be one of the most popular historical places in Karnataka. The artifacts and relics speak of a gallant warrior who started fighting against the British at an early age of 15. During his governance, he managed to bring many innovations in the military. He also built many more monuments, roads and ports.

If you haven’t visited yet, an outing to this Summer Palace is a must! Take a tour of the Palace and come a step closer to Tipu Sultan’s life. You can’t really take any photographs inside the museum but you can surely keep them in your memory. If you are as hypnotized as I have been with all that our historical anecdotes have to offer then make a trip!

You can take your bike, as this palace is not going to take more than 2-3 hours from the city. Explore the fascinating architecture and history and but of course enjoy the journey!