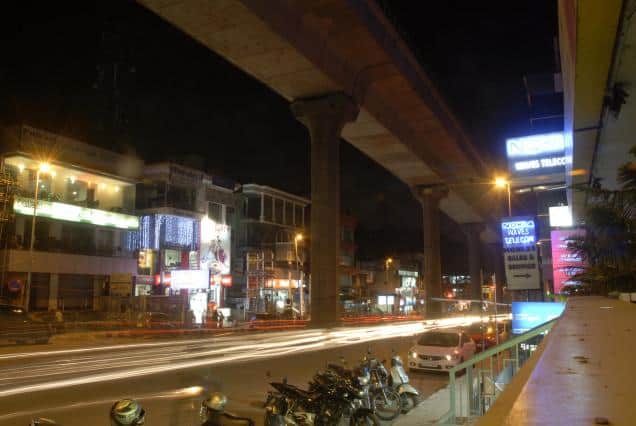 “When the fabled founder of Bangalore, Kempe Gowda, set out to build his dream city in the early sixteenth century,” writes George, “his mother gave him two instructions: Keregalam kattu, marangalam nedu. Build lakes, plant trees.” In stark contrast now, most parts of Bangalore have turned into steel and concrete jungles. It’s once empty roads are choked with traffic congestion that would give Beijing a run for its money; a large section of the city suffers from water crisis; and, over the last few years, incidents of atrocity towards people from India’s northeast or from the African nations have been on the surge.” – HuffPost, Somak Ghoshal, November 2016.

The year is 2018. Nothing has changed. This is the state of affairs in most parts of the city around Bengaluru – it gets worse every day. Let’s explore one of the gorgeous localities of Bangalore – Indiranagar.

In the 1980’s Indiranagar was created as a BDA layout. Indiranagar is one of the most expensive, luxurious and sought after places in Bengaluru. It was named after country’s former prime minister, Indira Gandhi. It is divided into two stages. Indiranagar is also known as CMH Road metro station.The metro station is located on C.M.H road in Indiranagar. This locality shares good connectivity with well-known and established neighborhoods like Ulsoor and M.G Road in the West, Domlur in South, Vimanapura in East and Byappanahalli in the North. Located in the heart of the city with spacious lanes and tree-lined streets, make this locality a living delight. This locality is an address to many independent homes and multi-story buildings.There are several famous politicians and celebrities living in this area.

Though broadly a residential hub, Indiranagar developed into a commercial sector post the emergence of the IT division. It is a home to expansive retail outlets, shopping malls and restaurants. It has a huge number of large-scale branded showrooms lined up such as Allen Solly, Louis Philippe, Fab India, and Wills Lifestyle et al. There are numerous restaurants, cafes and pub dominating Indiranagar avenues. There are popular microbreweries and bars like Toit, Bflat bar, Monkey bar etc. restaurants like The Black Rabbit, Barbeque Nation etc. and cafes like The Wishing Chair etc. In this neighborhood, nightlife is dominated by live events carried out in cafes and restaurants surrounding the place.

These progressions, expansions and vibrant culture attract people who want to experience a pulsating and alive nightlife. We see many young souls diving into this vivacious energy. However, there are many who hesitate to travel the distance during peak traffic hours. The situation gets out of hand when commuters have to deal with clogged roads and chaos for a longer span of time.

Indiranagar is a stunning neighborhood fenced by greenery and the required amenities. If you ever wonder what kind of picture Kempe Gowda’s mother had in mind when she spoke of a city immersed in lakes and trees – I think Indiranagar and Ulsoor do immense justice to that vision. However, this image is changing dramatically. The residents here can feel the pain of everyday commute.

Interestingly, in 2017 a resident of Indiranagar Praveen created WhatsApp group for local residents and traffic police officials. His agenda was to bring traffic and other similar horror road stories to everyone’s notice so something can be done about it. The first post was on crowding of lanes by a series of auto-rickshaws on C.M.H road. The very same day cops resolved this issue. This is how disturbing congestion, crowding, and chaos can be for daily commuters. The News Minute journalist, Prajwal Bhat, covered this story in November 2017.

This brings to light how commuters want a hassle-free travel and want their everyday commute to be efficient and peaceful. Though the WhatsApp group initiative was quite ingenious and helpful – I think commuters need to take traveling in their own hands to make commuting pain-free and enjoyable. Today many companies are coming up with innovative solutions – one such resolution is to get two-wheelers on rent for the daily commute. Maneuvering around via bike can make the day-to-day travel less laborious and a lot more fun.

Purchasing two-wheeler can be a costly affair. Bike on rent can make travel simple and affordable. Ontrack, a monthly bike rental company, is thriving to make a commuter’s travel life easier and more efficient. They offer two-wheelers for rent on a monthly basis with multiple perks. Talk with our executives or visit our office in Koramangala to know more about our bike hire services.